Fluoridation: What a real debate requires

Recently, Forbes took anti-vaccine activists to task in an article headlined “Hyping your conspiracy theory in 5 easy steps.” That article reminded me of the similarities between tactics used to oppose childhood vaccines and community water fluoridation. Research about each topic can easily be misrepresented in ways that confuse the public.

As you probably know, fluoride is a mineral that exists naturally in virtually all water supplies but at a concentration that is too low to prevent tooth decay. This is why so many U.S. communities fortify their drinking water with additional fluoride. The Centers for Disease Control and Prevention (CDC) has concluded that fluoridation reduces tooth decay by about 25% over a person's lifetime.

Anti-fluoride activists often use flawed research or cherry-pick quotes to misrepresent what the science shows about fluoridation — and it’s happening on both sides of the Atlantic. Gerry Byrne, an Irish journalist, found several examples in a report compiled by 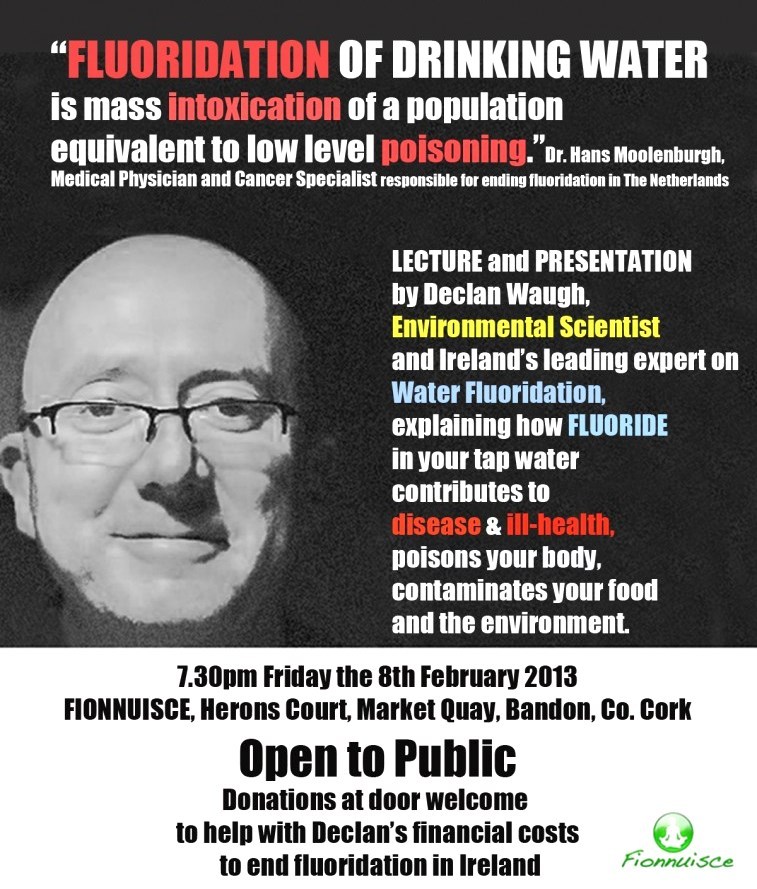 a fluoride critic named Declan Waugh. Waugh claimed his information "leans heavily" on a 2006 report issued by the U.S. National Research Council (NRC). Yet nothing in that NRC report casts doubt on the safety of fluoride used at recommended levels. As the NRC itself noted, the conclusions of its report "do not apply" to the concentration of fluoride used in community water fluoridation. In fact, the toxicologist who chaired the NRC committee stated in 2013 that he does not see “any valid scientific reason for fearing adverse health conditions” from drinking fluoridated water.

Waugh also uses his Twitter account to spread alarmist messages about fluoride (like those on the above poster) that do a disservice to scientific principles. One recent tweet declared: "fluoride causes prostate cancer." His evidence? Waugh asserted that Ireland's prostate cancer rates "are the highest in Europe and the world." Even if there were some cause-and-effect, this is incorrect. International data show that Norway, Sweden and France have higher prostate cancer rates than Ireland.

Taking a similar approach, one online columnist recently asked this rhetorical question: "If fluoride toothpaste is the answer to dental decay, why is it that 98 percent of Europe is fluoride-free?" On the contrary, Europe is not 98% fluoride-free.

Salt fluoridation reflects the position of the World Health Organization, which has recommended that "salt fluoridation should be considered where water fluoridation is not feasible for technical, financial or sociocultural reasons." Fluoridated salt reaches the largest percentage of residents in Germany and Switzerland. Interestingly, these two countries have among the lowest rates of tooth decay in all of Europe. Of course, people on salt-restricted diets won't receive the full benefits of fluoride, which is one reason why fluoridating water is a better approach.

Here in the U.S., fluoride critics are making various arguments that may sound worrisome until the facts come to light. A few months ago, a fluoridation opponent in Kansas made a claim about cancer that doesn't stand up to the evidence. In February, a resident of Hernando County, Fla. tried to link fluoride with Adolf Hitler — an allegation so far-fetched that PolitiFact (an independent fact-checking service) classified it as "pants on fire" false.

A real debate can only occur when two sides play by the same rules. This means relying on scientific evidence that is reliable and robust. It means presenting studies or reports in a way that accurately reflects their conclusions. It also means double-checking facts or historical information before making an assertion. Because fluoridation opponents don't play by these rules, there is no debate.